We’re happy to provide planting plans for our clients

whether it’s a new design for a garden, new borders for an existing garden, or refurbishing tired and overgrown borders.

Planting plans can be the most complex part of the design process. Our designers need to consider the form, texture, colour and seasonality of plants, as well as your personal preferences.

We also need to take horticultural requirements into consideration, things like soil type, the aspect of the garden, (sun, shade, wind level and frost pockets), level of maintenance, and speed of growth and establishment of plants. 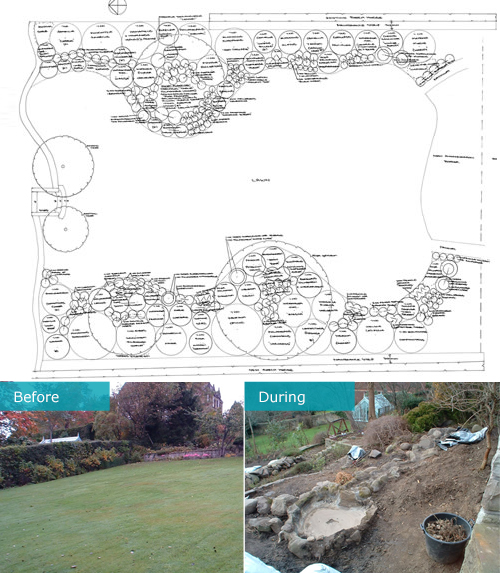 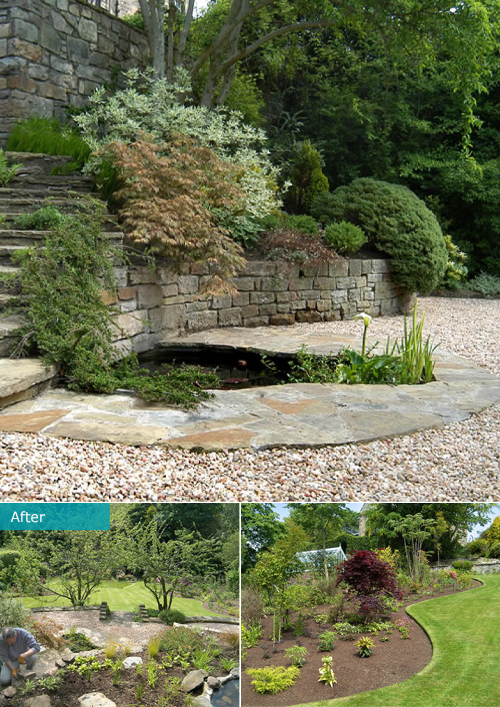 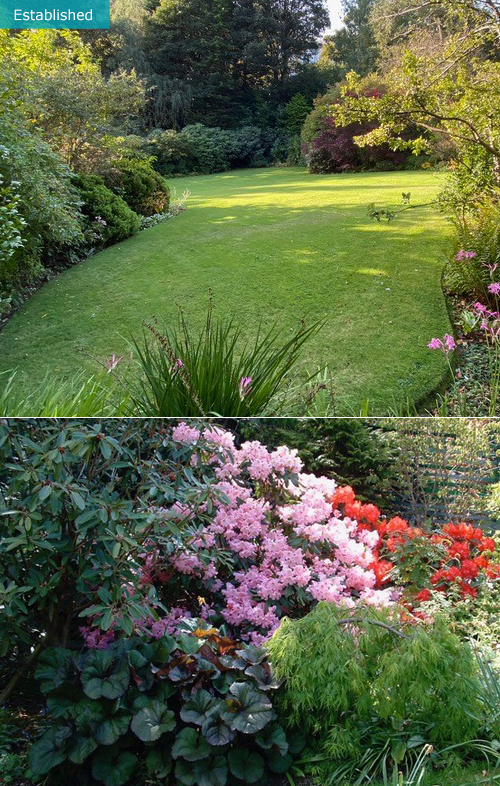 New planting plans and restoration of an established garden in The Grange, Edinburgh.

A detached Victorian stone built property, with a large south facing rear garden on three levels, running down from the house. The ‘jewel’ in the garden is a beautiful water feature running through the top two levels.

The clients, a professional couple with teenage children wanted to develop the bottom level of the garden, (30m long by 21m wide) which was a sloping lawn, with two narrow flower beds running down the boundaries, and an existing rhododendron border at the bottom of the garden, with a wooded area behind. The client wanted to add to the rhododendron border, and had ordered around twenty 2m specimens from Glendoick Nursery in Perthshire, for delivery in late autumn. Polley Garden Design was commissioned to produce a planting plan with appropriate under planting for this area, and two large borders running down the side boundaries of the area.

Planting plan, garden before and during

In keeping with the ‘woodland’ feel of this area of the garden, the new 30m borders were dug out with long soft informal curves, encouraging people to walk around them to enjoy the planting. A tree was removed, and others ‘crown lifted’ and an old hedge removed, and a new beech hedge planted along the west boundary. Maintenance strips were left next to both boundary hedges to allow easy access for hedge cutting.

The planting in the new borders was primarily of large shrubs with summer and autumn colour in flowers and leaves, for example, Philadelphus ‘Virginal’, Viburnum opulus, Enkianthus campanulatus, with some spring interest to ensure the area looked cohesive and several smaller trees were also added to the planting. Softer front of border smaller planting was added to give a more intimate feel. Spring bulbs were also planted in the lower area of the lawn, and borders to give a brilliant spring display.

The clients also asked us to look at other areas of the garden, where the planting was ‘tired’ and overgrown. An area of the water feature was totally overgrown with conifers and these were removed to reveal it, and soft waterside planting added to compliment the feature. Next to it was a rose bed, and this was dug up and a new rockery bed established with existing stone from the garden.

A number of other people were involved in the project, including